Multi-Domain Operations – What It Means for the Industry?

The 2019 US Army Modernization Strategy (AMS), Investing in the Future provides a clear azimuth for Army modernization.  The strategy states:

“The primary end state of the 2019 AMS, nested with the 2018 Army Strategy, is a modernized Army capable of conducting Multi-Domain Operations (MDO) as part of an integrated Joint Force in a single theater by 2028, and ready to conduct MDO across an array of scenarios in multiple theaters by 2035. The MDO concept describes how the Army will support the Joint Force in the rapid and continuous integration of all domains of warfare – land, sea, air, space, and cyberspace – to deter and prevail as we compete short of conflict, and fight and win if deterrence fails.”

The Army’s modernization priorities are long-range precision fires, next-generation combat vehicle, future vertical lift, the network, precision navigation and timing, air and missile defense, soldier lethality, and the synthetic training environment. The Army established Cross-Functional Teams (CFT) to truncate procurement of materiel solutions and the Army is well on its way to realizing modernization priorities.  How can Industry assist the CFTs to achieve these priorities within the time frames listed in the AMS?

“The Army will modernize how we fight, what we fight with, and who we are. This approach integrates the elements of doctrine, organizations, training, materiel, leader development and education, personnel, facilities, and policy (DOTMLPF-P) within the Army, with other Joint Force elements, and alongside allies and partners. How we fight is the realm of concepts, doctrine, organizations, and training. What we fight with is characterized by materiel development and procurement, guided by the Army’s six materiel modernization priorities. Who we are encompasses leader development, education, and 21st-century talent management.

Opportunities will exist beyond materiel development to assist with Army modernization and enable an MDO capable force.  Currently, experimentation is being conducted at the MDO Battle Laboratory, Maneuver Center of Excellence, Ft. Benning, GA.  As observations and conclusions are collected and developed, TMST will continue to stay at the forefront of providing insights into MDO and modernization efforts. 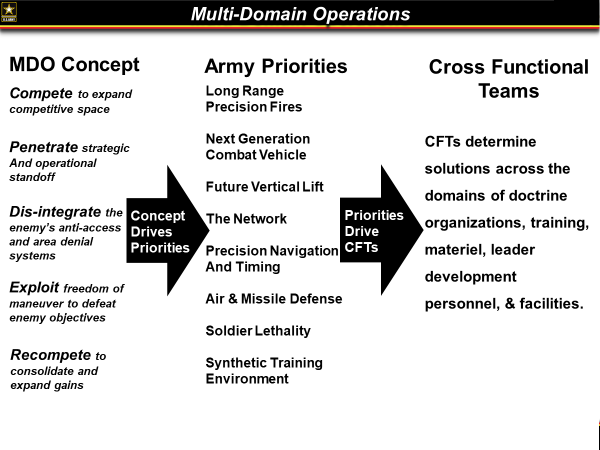